Tornado Down
Tornado Down with John Peters and John Nichol
The Sunday Times No. 1 best-seller 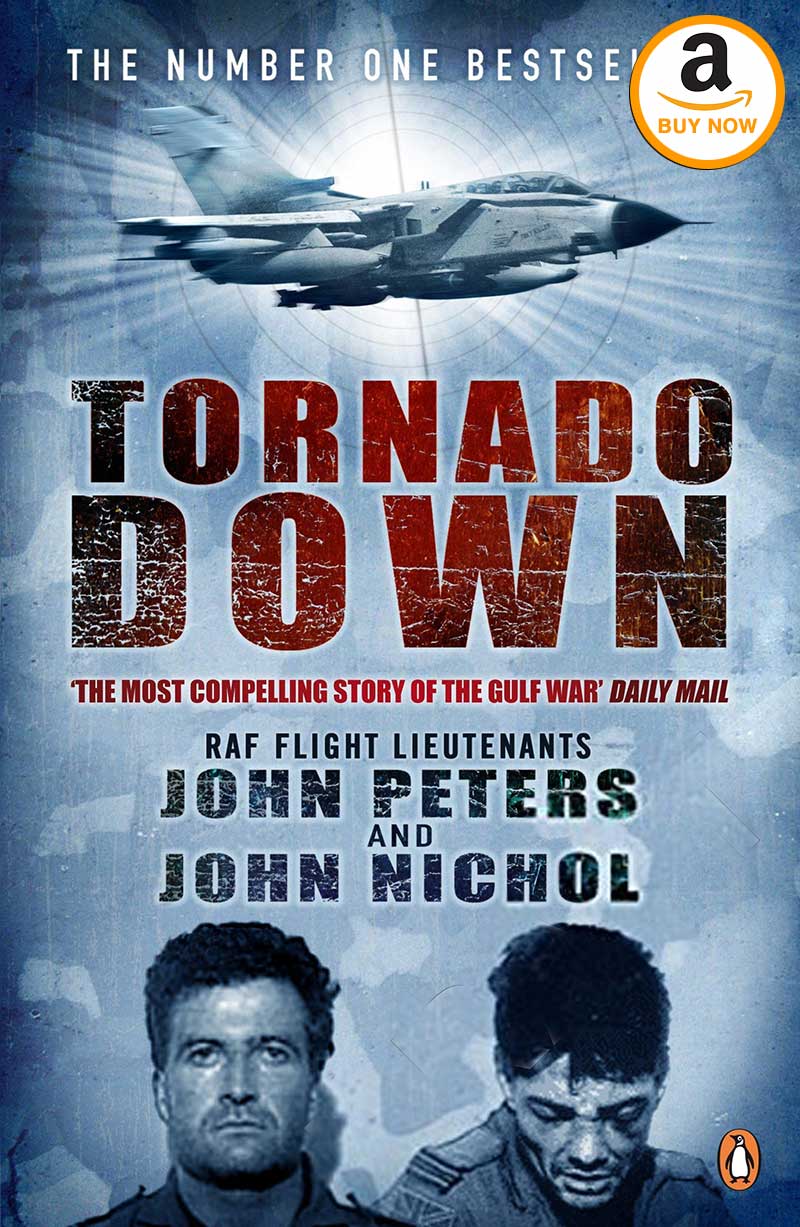 Gulf War One
At the spearhead of the Allied air attack, RAF Lieutenants John Peters and John Nichol are shot down by a SAM missile in enemy territory on the first night of Gulf War One. Captured, tortured and paraded by their Iraqi interrogators, their battered faces were broadcast across the world’s television screens, becoming not just one of the most enduring images of that conflict, but a potent symbol of Saddam Hussein’s brutality. Entombed in a Baghdad prison, their struggle to stay alive – and resist interrogation – is a gripping story of human survival at the limits.

Excerpt:
‘The Tornado was doing 540 knots fifty feet above the desert when the missile hit. A hand-held SAM-16, its infra-red warhead locked onto the furnace heat of the aircraft’s engines. Some lone Iraqi’s lucky day. Travelling at twice the speed of sound, the SAM streaked into the bomber’s tailpipe, piercing the heart of its right turbine. Five kilograms of titanium-laced high-explosive vaporised on impact, smashing the thirty-ton aircraft sideways. It shuddered, a bright flame spurting from its skin: fifteen million pounds-worth of high technology crippled in a moment by the modern equivalent of the catapult.’
Reviews
‘This has got to be the best book I've ever read; couldn't put it down for a second - I always wanted to know what happened next. I would recommend this book to anyone.’

‘I almost felt like I was in the aircraft with them, flying in a jet aircraft at 400 miles an hour. Accounted by the authors with great writing skill.’

‘I am amazed I took so long to discover this book! During operation Desert Storm I was living in the Middle East and followed the TV news 24/7. Peters and Nichol’s story is gripping, exciting, frightening, and downright heart-breaking at times. How they managed to retain any scrap of their sense of humour through that terrifying, unimaginably horrible ordeal is beyond me, but there were times when they did; their will to live was truly admirable. I thoroughly recommend reading this.’

‘How these guys managed to cling onto their sanity in that Iraqi hell hole is beyond me. This was well worth the purchase. I'll be reading it again and again. A brilliant book.’

‘I wouldn't normally be attracted to a book about fast jets, but this is a story of human frailty, endurance and the will to survive.’